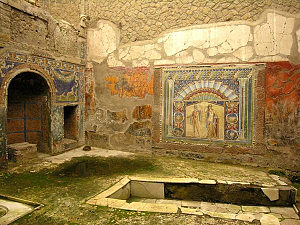 Spread over an area of 448.000 square meters, Pompeii has seen the light again in the XVIII century thanks to the initiative of Charles III of Bourbon, King of Sicily at the time. The archaeological site, UNESCO heritage since 1997, is a labyrinth of streets that lead straight into the heart of the ancient civilization and that reveal its lifestyle, tastes, the reference points. To get to know the town, the only compass available is the thirst for knowledge.

Those who haven't enough time to visit it all, they can choose a route that requires a half day consisting of the most significant private and public Domus. They can then come back to Pompeii to fully live an unforgettable experience.

There are three possible accesses to the excavations:

From each of these, it begins a path that includes buildings, temples, sanctuaries, baths and theaters.

In the suggested itineraries, are highlighted the main works, meaning those to which the modern historiography connects a meaning or a particular moment in the life of this ancient people. 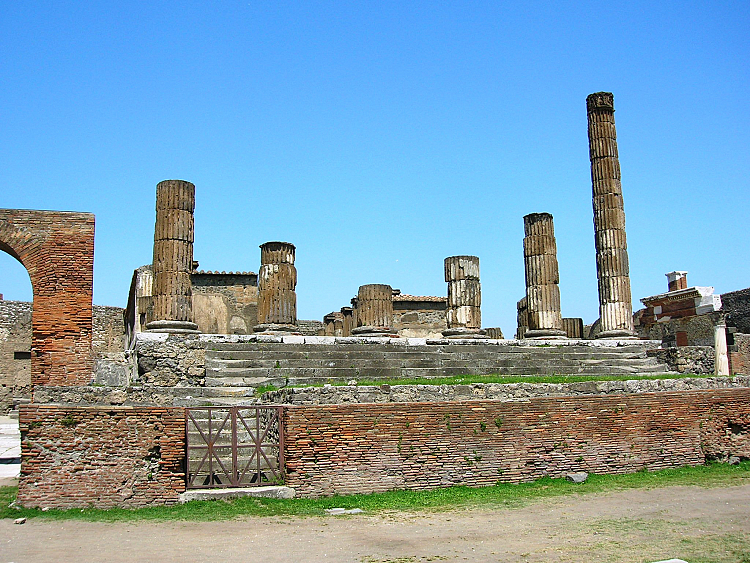 The door, so called because it faces the sea to the West, had one passage for pedestrians and one for animals. The city walls date back to the VI century BC and they are long over 3200 metres. Twelve towers, more numerous on the north side where the city was most vulnerable, assured the defense. The niche on the path contained a terracotta statue of Minerva, patron deity of the doors.

Built in pre-Roman times in the middle of a sacred area, it was surrounded by a porch that combines Ionic and Doric style. Inside there were various frescoes depicting scenes from the Iliad. In the middle of the discovered area it was realized a travertine alta, probably of the republican age. The sanctuary was connected to the Forum by a monumental colonnade. Placed in front of and around the colonnade, there were the statues of Hermaphroditus, Venus, Apollo and Artemis today visible at the National Archaeological Museum of Naples.

The oldest of all the churches is located in Pompeii and it goes back to a date between 130 and 120 BC. The building, about 1500 square meters accessible from the Forum hole through tuff pillars, consisted of a central nave and two lateral. At the center of the shorter side there is a tribune, a sort of safe room or prison for the administration of the judicial affairs.

House of the Faun

Going back on the road of Nola or of the Fortune, there is the house of the Faun, so named by the discovery of a bronze statue of a dancing satyr, near the main atrium. Among the largest and richest houses of Pompeii, it is also known for the mosaic of the II century BC depicting the decisive battle between Alexander the Great and the Persian king Darius.

House of the Ancient Hunt

Typical Roman house of the II century BC with only two colonnades, it has frescoes with mythological scenes. The House  is a must for those who want to consider the common thread between hunting art and visual art. In the tablinum, the big room between the atrium and the peristyle, welcome us beautiful hunting representations that have their natural sequel in the porch of the garden in which we admire fighting and hunting of animals. Even the cupids adorning the tablinum are hunters.

Commissioned by Eumachia, priestess of Venus, it is also called Portico della Concordia Augusta and is dedicated to the cult of the emperor and to Pietas. At the ends of the facade were four niches for the statues of Aeneas, Romulus Augustus and Tiberius. The interior consisted of a porch behind which was the statue of the priestess whose original is in the National Archaeological Museum of Naples.

Space dedicated to the imperial cult and composed by a tuff square portico with niches for two marble statues. To his left there is a space with a masonry counter, we think for the fish selling. Also the tholos, the circular structure in the center of the courtyard, had the same function. The walls of the porches were decorated with everyday scenes and with mythological subjects.

Realized around the middle of the II century BC and restored following the roman taste, it had a staircase divided by the corridors into three areas, each one of them also divided into five sectors. The velarium was the big canvas used as a coverture for the hot days. There, there were represented Greek-Roman comedies and tragedies.

Also called Odeion, it was built in 79 BC and it was assigned to the representation of mime and singing performances. Decorated with polychrome marbles it had a roof that favored the acoustics. On the external wall, the graffiti left by the spectators are still visible.

Built in 70 BC, it is the oldest arrived to the present day. It housed up to 20.000 spectators from everywhere and it had an arena around which there was a parapet painted with fight scenes. Because of the brawl that broke out between Pompeians and Nucerians, it was closed for ten years.

Of all the Pompeian temples damaged by the earthquake of 62 AD, the first to be rebuilt from the ground up was that of Isis. Untouched in the decoration and the furniture, it has a side entrance with three shutter door surmounted by the epigraph regarding its reconstruction. In the outdoor area, it has a descent to an underground tank for the holy water. It inspired Mozart for the sets of the first performance of the “Magic Flute” in Vienna in 1791.

Main square and moral center of the city around which developed public buildings. Inaccessible to chariots, it had the original floor in tuff and then in travertine slabs. It was originally surrounded on three sides by a tuff doric porch, covered with stucco, with the Ionic style upper gallery, comfortable and safe place to watch the celebrations and games.

House of the Dioscuri

Among the most beautiful of Pompeii, the house is architecturally complicated. It has a peristyle, two atria, an exedra, a pool for water games, a garden and various utility rooms. The wall decorations are made by the same workshop that decorated the House of the Vettii. The most significant are inside the National Archaeological Museum of Naples, including the small pictures with the Dioscuri Castor and Pollux from which the name of the house.

At the entrance of the house which opens onto Via di Mercurio, a fresco tells the story of Meleager and Atlanta. The whole environment, particularly refined, is typical of a high class. This is demonstrated by the pools and marble tables, the big peristyle, the columns inside the living room, the fountain for water games.

Known for the painting of Diana and Actaeon decorating the small peristyle accessible from the atrium. The style refers to the Samnite period (180 BC) and along with that of the Faun is one of the best preserved examples of Pompeii. Probably it served as an hotel after the earthquake of 62 AD with the addition of a second floor and the renewal of the decorations.

Villa of the Mysteries

Dated II century BC, the complex takes its name from the fresco in the hall of the building that faces the sea. It shows scenes of a mysteric ritual linked to Dionysus and his wife Arianna. In the tablinum there are miniaturistic paintings of Egyptian inspiration.  A reconstructed wooden press, testifies the production of wine in a part of the villa.

It runs parallel to the city walls and it has numerous tombs including that of the priestess Eumachia. On both sides of her grave, there are two of them with the podium surmounted by aedicula that hosts the statues of the deceased. The poorest graves are indicated by rough stone busts or steles.

House of the Hercules' Garden

Characteristic of a certain area of the city, it has a big garden with irrigation canals. Here it is probable that were cultivated flowers for the production of essences to sale on the spot. Its name comes from the discovery of a marble statue of Hercules in the eastern part of the garden.

Orchard of the fugitives

What was once a vineyard with a triclinium for banquets, it is now the place where 13 people including adults and children found the death by asphyxiation while they were escaping during the Vesuvius eruption. The casts are still visible.

Originally seat of the polling station, the Comitium represents together with the Tabularium (administrative seat), the Curia and the Magistrates building, the complex of public buildings related to the Pompeii civilian life.

At the crossroads between Via di Nola and Via di Mercurio it rises the temple for the cult of the Fortuna Augusta, instituted in Pompeii in 3 AD and entrusted to a college of ministers who every year put a small statue (signum) inside the temple. Built at his own expense and on his own soil by Marco Tullio, magistrate and military tribune, it was renovated after the earthquake of 62 AD.

Five large lava millstones grind the grain in this building connected to the mill. The sale had to take place in an adjacent space equipped with counter, absent here. The street sellers of bread were called libani.

This is not the official website of Pompeii or the Official Ticket Office.
This is an online project made by New Globus Viaggi Tour Operator that gives you the opportunity 24 hours a day, 7 days a week, to buy tickets and guided tours of the Pompeii Ruins and other highlights in Naples.

Looking for Tickets or Guided Tours?

Pompeii Ticket is an online project made by New Globus Viaggi Tour Operator that gives you the opportunity 24 hours a day, 7 days a week, to buy tickets and guided tours of the Pompeii Ruins and other highlights in Naples. Read more

The site uses its own and third-party cookies for statistical purposes and to provide additional services. By proceeding you accept their use. You can change the usage options also by your browser settings. OK - More informations