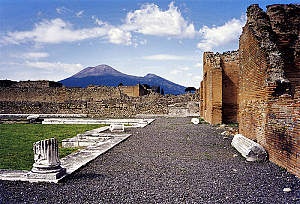 Pompeii. Nearly 3.000 years have passed (VII century BC) from that first settlement that gave rise to the city in Campania, and yet it feels to cross a territory that is still full of life, crafts, art, culture, trade. It's thanks to the ceilings, floors, frescoed walls and main roads that have remained standing despite the time and the disasters– the 1980 earthquake is well known – showing the muscles of a civilization that does not yield even to the Vesuvius power.

The gens pompeiana has left to posterity an open-air museum that offers real perspectives and deepenings. Strategic crossroad in the peninsula center, Pompeii was a conquered land, especially by the Greek and Etruscans whose pottery intended for the Apollo's temple and the bucchero are a rich testimony. In the IV century BC, with the arrival of the Samnite populations from the inland, the city enjoyed at the same time a period of urban growth (dates to this period the construction of the city walls) and of new conflicts for its domain that will see the undisputed victory of Rome caput mundi.

Under the protection of the eternal city, it flourished the trade of food like wine and olive oil and the building industry with new buildings that have nothing to envy to the magnificence of the Hellenistic tradition palaces. Converted into municipium and then into colony “Pompeia Veneria Pompeianorum” by the dictator Publio Cornelio Silla who conquered it in 89 BC, later it became favorite destination of the Roman nobility and, in the imperial age, of the pro-Augustus families that led to a flourishing and propagandistic building activity (Tempio della Fortuna Augusta and Edificio di Eumachia).

It changed the architectural model in general determined to abandon the traditional scheme of the Italian home in favor of a house built on several levels with a central courtyard on which overlook tabernae and craft workshops.

The following years alternated periods of crisis and resonant events, like the Nero matricide and the ensuing fight in the amphitheater between Pompeians and Nocerians. In 62 AD an earthquake devastated the city and several other towns in the area.

The renovations were still in progress, when on August 24, 79 AD Pompeii was buried by a steady rain, lasted four days, of lapilli and ash from the nearby Mount Vesuvius. The tragic event in which even the naturalist Pliny the Elder died, cemented the people and handed forever to history Pompeii and its civilization.

This is not the official website of Pompeii or the Official Ticket Office.
This is an online project made by New Globus Viaggi Tour Operator that gives you the opportunity 24 hours a day, 7 days a week, to buy tickets and guided tours of the Pompeii Ruins and other highlights in Naples.

Looking for Tickets or Guided Tours?

Pompeii Ticket is an online project made by New Globus Viaggi Tour Operator that gives you the opportunity 24 hours a day, 7 days a week, to buy tickets and guided tours of the Pompeii Ruins and other highlights in Naples. Read more

The site uses its own and third-party cookies for statistical purposes and to provide additional services. By proceeding you accept their use. You can change the usage options also by your browser settings. OK - More informations